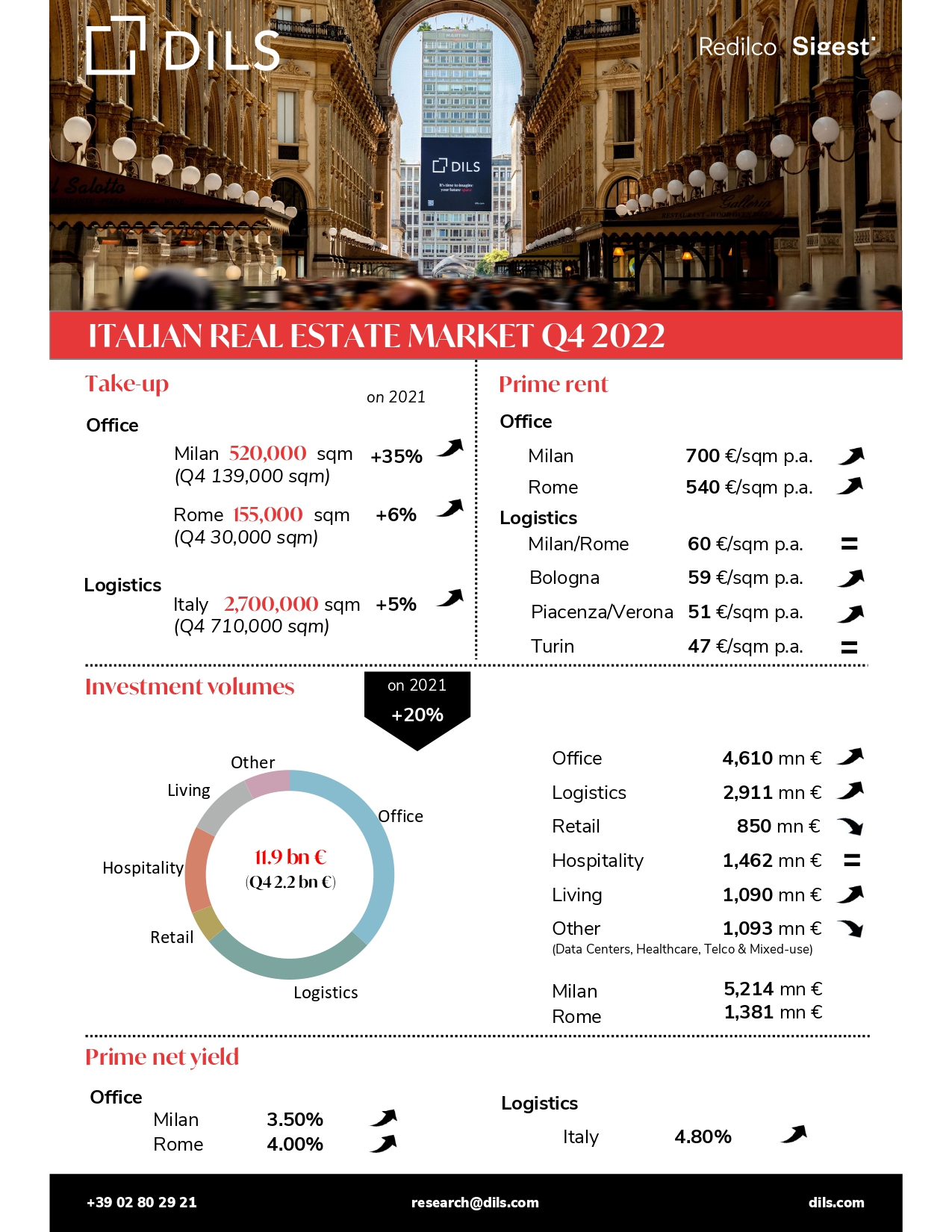 Excellent performance with nearly €12 billion investments (+20% y/y); signs of a slowdown in Q4

Office sector is the first asset class (+103% y/y), followed by logistics and hospitality

The investment volume in Italy in 2022 approaches €12 billion, representing a 20% increase compared to 2021. The remarkable performance is driven in particular by the first three quarters of the year, which recorded approximately € 9.7 billion, almost equalling the volume of the whole of 2021, followed by € 2.2 billion in a Q4 characterized by a contraction, compared to the same period of the previous year.

On an annual basis, Office is the asset class preferred by both domestic and international investors, totalling transactions for € 4.6 billion in 2022 (Milan in the lead attracts 79% of total volumes) and a growth of 103% compared to 2021, of which € 800 million invested in the last quarter. Economic uncertainties continue to direct investment decisions towards "core" offices, despite the increase of their prime net yield. Nevertheless, figures relative to take-up have been extraordinary, especially regarding next generation offices.

Over the course of 2022, Milan office letting market recorded a total take-up of 520.000 sqm (a +35% growth with respect to 2021), of which 139.000 sqm were leased in the last quarter. The annual take-up equals the historical record reached in 2019, confirming the market solidity of Milan. In Rome, take-up reached 155.000 sqm in 2022, a result in line with that of the previous year, of which 30.000 sqm let in the fourth quarter. During 2022, data show that tenants increased their preference for grade A/A+ offices, which represented 80% and 48% of the total take-up in Milan and Rome, respectively. The intense demand for high-quality spaces, combined with the scarcity of grade A products, contributed to the increase in prime rent in the Milan market, where over the course of the year it grew by nearly 8% reaching 700 €/sqm/year, while Rome reached the level of 540 €/sqm/year.

Logistics has been the second protagonist of 2022 investment market, as it attracted 24% of the invested volumes (€ 2.9 billion), showing a +6% growth over 2021. The first nine months of the year registered record-high investment volumes for the sector, followed by a marked downturn in Q4. The leading cause can be found in the trend of uncertainty, volatility and wait-and-see behaviors that characterised financial markets since the end of July, with an upswing in prime net yield that reached 4,8%.

The logistics letting market recorded, at the end of 2022, a take-up of 2,7 million sqm (+5,2% on 2021), 27% of which in the last quarter (approximately 710.000 sqm). During the year, speculative developments accounted for a major market share, equal to almost 40% of the whole take-up. Increases in prime rents have been registered for some principal markets such as Bologna, that sets on 59 €/sqm/year, and Verona that grew by 11% over the last year to the current value of 51 €/sqm/year.

In 2022, the Hospitality sector maintains stable investment volumes in comparison to 2021, for a total amount of € 1,5 billion, 43% of which represented by four single asset deals: two prime resorts and two operations in central locations of principal Italian cities.

It’s been another year of growth for the Living sector which, in 2022, recorded an investment volume equal to € 1 billion, mainly concentrated in Milan (52%), followed by Rome and Turin, with an overall growth of 35% on the previous year.

Retail, especially out-of-town, has been particularly challenged by the recent times of uncertainty, as in 2022 it recorded an investment volume of € 850 million, down by 32% compared to the levels of 2021. From the letting point of view though, 2022 has been characterised by increasing dynamism: sector players showed a renewed interest toward expansion projects for major cities, rebalancing formats based on new guidelines focused on high-quality product.

Dils was involved in brokerage and advisory transactions for approximately € 3.5 billion, representing approximately the 30% of the total investment volume in 2022, with excellent performances in Office and Logistics, confirming its leadership in these sectors. In addition to the latter, €600 million of residential sales - equal to approximately 1,000 units - bring the total volume transacted by the Group to a value which exceeds € 4 billion.

“Despite the complex international scenario, rising interest rates, the inflationary surge and the volatility in the cost of energy, the Italian real estate market confirmed its resilience in 2022,” said Giuseppe Amitrano, Ceo of Dils. “According to forecasts by our Research Team, the signs of uncertainty recently observed on the market will result, in the first months of 2023, in a stabilisation of the volumes invested in both commercial and living. The driver of an increasingly sophisticated demand will be the high quality of the asset, sometimes more decisive than the location itself. Trends indicate a growing interest of users in those properties that are best in class for sustainability, ability to minimize energy consumption and ESG compliance. We expect a consolidation of this trend, also for investors, especially in the medium-long term, as we will see a new real estate cycle that will be characterised by three main factors: urban regeneration, hybridisation of spaces and sustainability."