Back
Next
Previous
October 5, 2022 Report 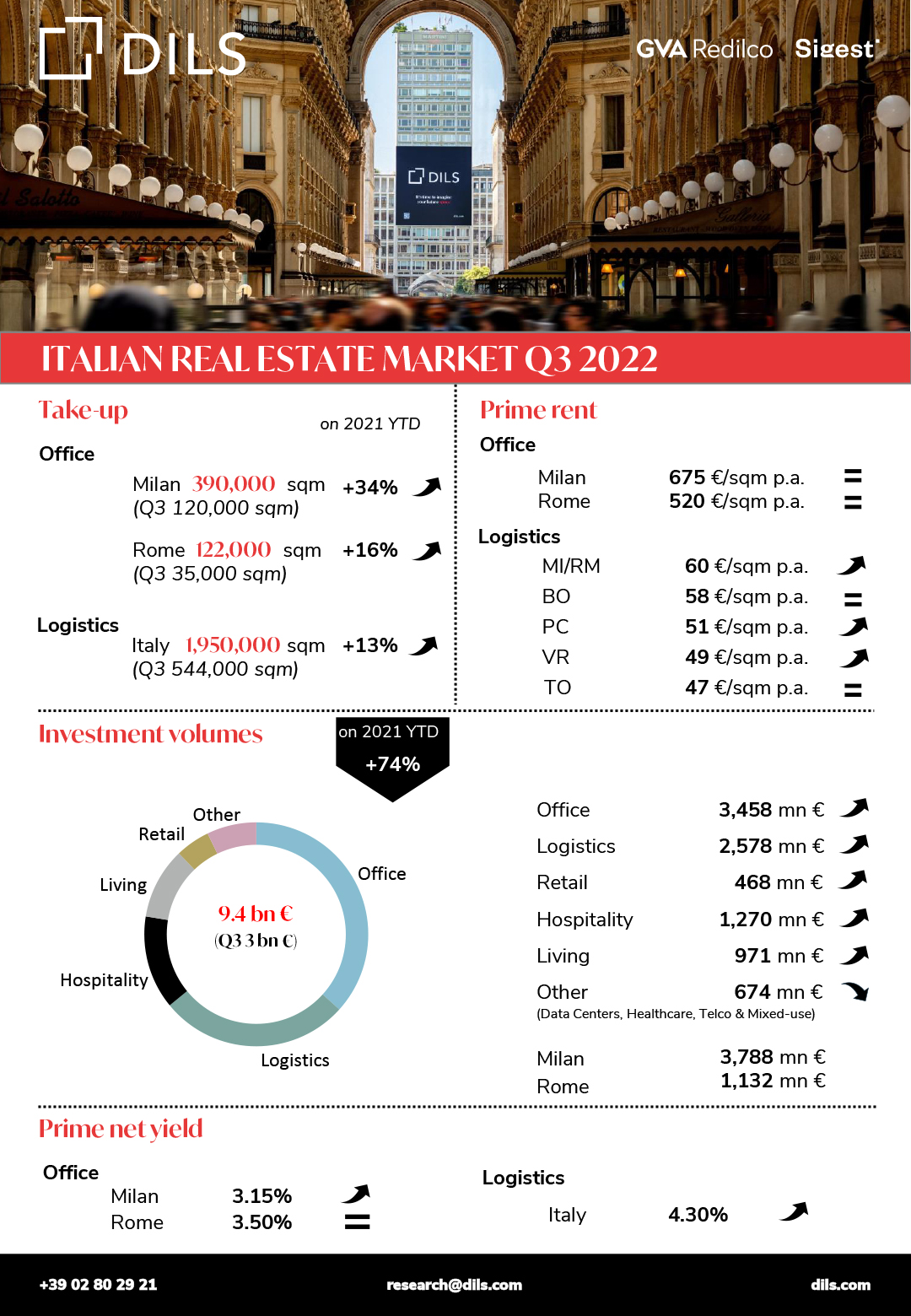 The growth trend of Real Estate investment volumes kept going during the third quarter of 2022 (+37% yoy).

More than 60% of total investments were attracted by office and logistics.

Inflation and interest rates ask for higher caution in the coming months.

Transactions reached € 9,4 bn in the first nine months of the year,  according to analysis by the Dils Research Team.

In the third quarter of 2022, approximately € 3.0 bn of investments were closed in Italy's real estate sector (+37% compared to Q3 21). This figure is in addition to the € 6.4 bn for the year's first half, bringing the total for the first nine months to € 9.4 bn, almost reaching the total investment volume of 2021.

The year’s first nine months are therefore confirmed as the best 'first nine months' since market records begun, with an average over the last 10 years of approximately € 5 bn. Considering the current pipeline of investment, it could be expected a closure of the year at the same level as in 2019.

The driving sectors were Office and Logistics, which together accounted for more than 60% of total investments in the first nine months of the year.

In a general context which is overall positive for the Italian real estate market, there are some signs of attention linked to the inflation dynamics in progress and, consequently, to the growth of the main benchmark interest rates. This led, compared to the previous period, to an increase in market prime net yields: Office and Retail both rose to 3.15% while Logistics stood at 4.3%, and we expect a further increase.

Data emerge from analysis by the Dils Research Team, one of the main market players in terms of the volumes traded in the Italian market, brokering transactions equal to 32% of the total volume during the first nine months of 2022.

“During the third quarter we observed a new growth of real estate investments in Italy, compared to the same period of the previous year. This confirms the dynamism of the sector and underlines the protective role of Real Estate against inflation. Out of the 3,4 billion euros transacted since the beginning of 2022 in the office sector, almost the half is related to deals closed in the third quarter. Dils identified in this sector the best opportunities for 2022. Considering our expectations for the last quarter, we believe that 2022 will prove to be a positive year for the real estate sector in Italy, both for the commercial sector, which will exceed 10 billion euros in terms of investment volumes, and for the residential, with sales for approximately 100 billion euros, a trend that we expect to continue at least until mortgage rates are below 4%. In the first months of 2023, we expect a slight decline in real estate transactions and a contraction of volumes. Uncertainty on inflation, interest rates and cost of financing cause a sentiment of moderate caution in the short term. Nevertheless, in medium-to-long term we expect the beginning of a new cycle for our country's Real Estate sector" said Giuseppe Amitrano, CEO of Dils. “Real Estate market will see a rebound, firstly led by investors, interested in acquiring sustainable buildings, then by a newly growing demand by end users. Already now, professional operators invest only in zero impact properties, and investors are willing to recognize for new buildings a premium price which, in some cases, can reach up to 20-30%. The rebound effect will also be sustained by a regulatory framework pushing to green transition”.

With about € 3.4 bn transacted during the first nine months of the year (of which about € 1.5 bn in the third quarter), Office remains the first asset class, after more than doubling the results achieved in the same period in 2021 and reflecting 37% weighting on the total investment volume.

The office component was the most significant in the key markets of Milan and Rome (67% and 51% respectively) and was characterised by core transactions with significant tickets (over € 100 mn), mainly finalised during the last quarter.

In the first nine months of 2022, the Office letting market in Milan has been characterized by high vitality, scoring a take-up level in line with 2019, the best year since the beginning of the records. Take-up stood at 390,000 sqm, with a +34% growth over the same period of 2021; 120,000 sqm of these were leased during the third quarter. The result is positive across all submarkets, rewarding particularly the most prestigious locations and the top-quality assets, especially when accompanied by green certifications.

In Rome, the letting market has been in continuous recovery since 2020, although still far from record 2019 levels, partly due to the limited availability of quality products in the main submarkets. In Q3 2022 35,000 sqm of transactions were closed, and a total of over 135,000 sqm achieved in the first nine months of the year, up 16% on the same period in 2021.

As expected, Logistics continues to drive the market: over € 720 mn in Q3, for a total of € 2.6 bn from the beginning of the year, weighting 27% of the total invested in Italy. The figure, up about two times compared to the same period of 2021, represents an absolute record for the first nine months of any year and was achieved thanks to the closure, during Q3, of an important international last mile portfolio counting 32 assets in Italy.

Logistics take-up continues to reach high levels of dynamism: 1.9 mn sqm located so far in 2022 – of which 544,000 sqm in Q3 - registering a 13% increase on the same period in 2021. The attention of tenants is particularly focused on the regions with the greatest potential for the sector, such as Lombardy and Emilia-Romagna. The high demand and the increase in construction costs fuel a general trend of increase in rents: prime rents in Milan (60 € / sqm / year), Rome (60 € / sqm / year), Piacenza (51 € / sqm / year) and Verona (49 € / sqm / year) are revised upwards.

The Hospitality sector has continued along a path of recovery, attracting € 300 mn in Q3 and approximately € 1.3 bn in the first nine months of the year, almost double the values for YTD 2021. Rome is in the sights of investors, contributing about € 280 mn during the first nine months, mainly focused on prime assets to be part of renowned international chains.

Investors see Living as a well-established sector, as it attracted about € 270 mn in Q3, for a total of over € 970 mn in the first nine months of the year (10% of total 2022 YTD investment volumes) and almost doubling volumes compared to the same period of 2021.

In Milan, investors continue to show interest in the BtR (Built to Rent) and PRS segment: according to data from the Dils Research Team, 7,800 of such apartments will be available on the market in the short-to-medium term, reflecting the high potential of this market.

The volumes invested in Retail during Q3 2022 equalled € 85 mn, for a total of over € 470 mn in the first nine months of 2022, a clear recovery compared to the same period of 2021 when investments had stood at approx. € 265 mn. On a letting perspective, expansion plans are mainly focused on the quality of the new openings: most retailers aim at improving environmental and social sustainability standards both in terms of products and formats. At the same time, an increase in the number of major international players evaluating expansion plans in Italy has been observed. The full recover of the tourism sector gave an extra boost to Retail, especially in the most attractive cities such as Milan and Rome.