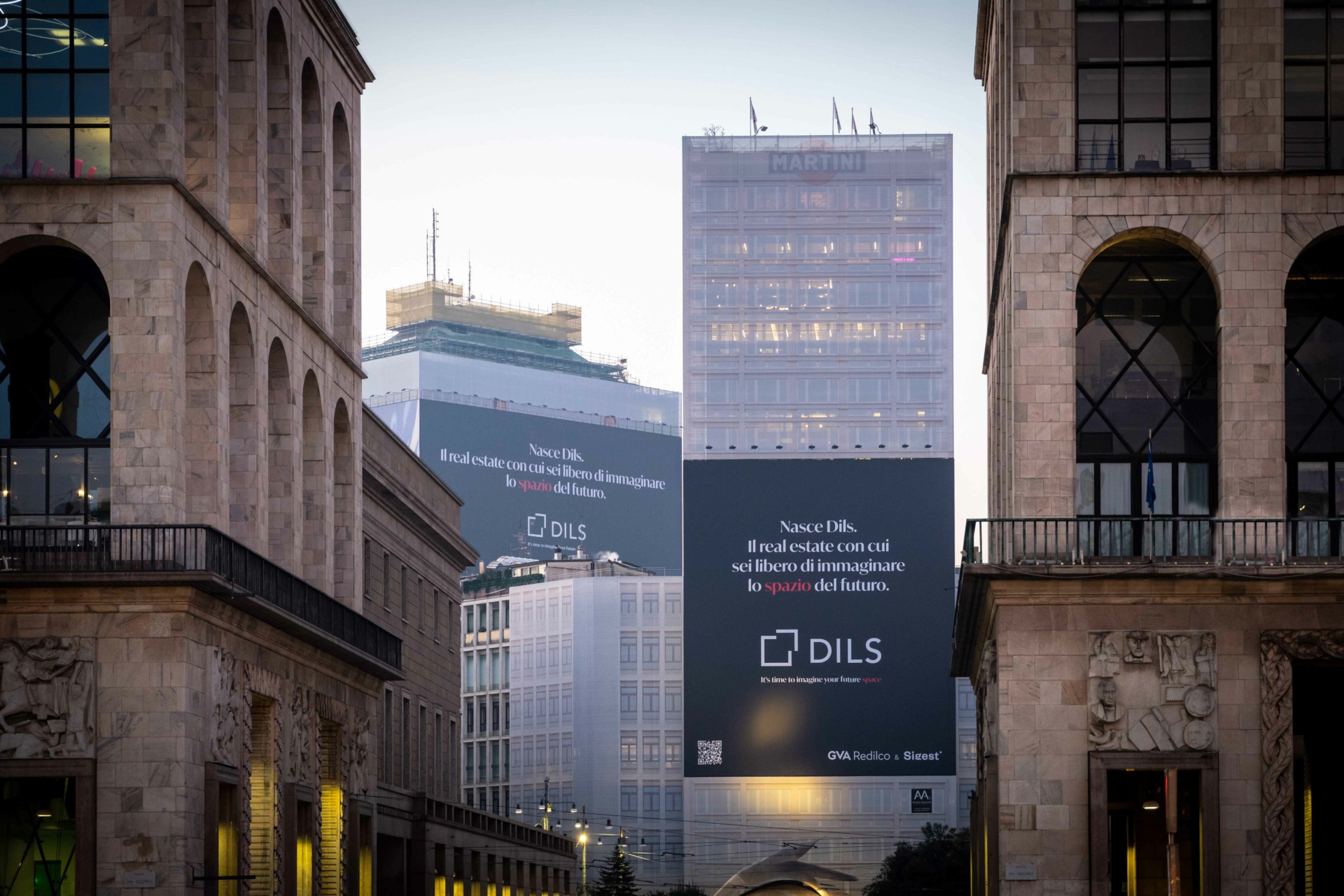 A NEW NAME AND A NEW IDENTITY, GEARED TO THE FUTURE AND REPRESENTING THE FOCUS ON CHANGE WHICH THE GROUP INTENDS TO ESTABLISH IN THE REAL ESTATE INDUSTRY

BACKED BY A 50-YEAR HISTORY IN THE ITALIAN MARKET,
DILS AIMS TO BECOME A EUROPEAN PLAYER BY LEVERAGING INNOVATION, TECHNOLOGY AND HUMAN CAPITAL

CEO Giuseppe Amitrano today announced the new brand, designed to strengthen the identity of a Group that promotes change and transformation of future spaces thanks to evolving lifestyles and habits

The rebranding comes on the 50th anniversary of the Group which has been gradually transforming its DNA. Today marks the start of a new journey for Dils, backed by constantly growing results and a business solidity that has attracted important new investors in recent months.

Established in 1971, GVA Redilco has been led by CEO and entrepreneur Giuseppe Amitrano since 2016, following a management buyout. In 2019, the merger with Sigest, a real estate player on the residential market for more than 30 years, led to the creation of GVA Redilco & Sigest. In the autumn of 2021 a minority shareholding was acquired by Redeal, an investment vehicle set up by H14, a Berlusconi family office, involving a number of other important private investors and Italian and international entrepreneurs, including the Marzotto, Doris, Alessandri and de Brabant families.

In 2021, for the fifth consecutive year GVA Redilco & Sigest was named a “Growth Leader” in the annual ranking drawn up by the German web portal Statista in collaboration with Il Sole 24 Ore, and for the fourth consecutive year it was confirmed a “Champion of Growth” in the annual scoreboard organised by the German Quality & Finance Institute in collaboration with La Repubblica Affari & Finanza. The workforce has expanded from 40 employees in 2015 to over 130 today, while revenues have risen from €6.3 million in 2015 to over €29 million in 2020. A further significant revenue increase, to more than €40 million, is projected for 2021.

The company has chosen a highly versatile new logo:  – a symbol that deliberately changes meaning depending on the point of view. The new name, Dils, composed of four letters, is simple and immediate and is intended for an international audience. Dils also retains a link with the previous brand: Dil from Redilco and the S of Sigest, reflecting the value of integrating the two companies within a single Group. In its pronunciation Dils evokes one of the most common terms in the real estate sector and the business world in general: “deal”.

“Deal” signifying not only a real estate “transaction”, but also “agreement”, “consensus” and “accord”, words that acquire even greater importance in this particular period. Consensus today is an indispensable value when rethinking the rules of a community, a territory, a city and its constituent spaces (houses, offices, shopping centres and logistics facilities, schools, squares, etc.). Dils suggests a positive concept of evolution and encourages joint reflection to achieve agreement at any level. The ultimate goal is the ability to bring together different ideas and enable them to co-exist, something that can happen by grasping opportunities for change.

Dils aims to become the protagonist of a transformation process, wherein the rules are rewritten in order to change the paradigms of a sector – the real estate sector – that impacts the lives of each of us. A transformation that can be extended from real estate to embrace urban landscapes and infrastructure, as well as models and tools for an ecological transition, economic growth and social sustainability.

The pay-off “Imagine your future space” highlights the importance of imagining and reflecting on the spaces of the future, within a broader urban regeneration process that helps make cities more sustainable and inclusive. A general appeal to the ability to imagine a different future in the many areas that influence the lifestyle of individuals and communities: from art to culture, architecture and fashion, from homes to the consumer experience, the workplace and last-mile logistics.

The rebranding is just the first step in an ambitious long-term development plan beginning in 2022, whose objective is to create a new European player as an alternative to the current offer in the real estate sector. Dils’s main growth drivers will be technological and digital innovation and an internationalisation project targeting expansion initially in Spain, Portugal and France, and later in other European countries such as Germany, the Netherlands, Poland and the United Kingdom, with estimated revenues of more than €100 million by 2026.

“Dils marks our evolution, after 50 years in which we have achieved important objectives. With the new brand we want to translate our history into an idea of future and innovation and to emphasise our vocation for dynamism and change in a sector at the heart of a deep transformation, as well as our ability to forecast market trends in order to offer innovative solutions,” said Dils CEO Giuseppe Amitrano. “Now we are ready to enhance and export to other markets the real estate skills we have developed in Italy alongside our domestic and international clients.”

In addition to the communication campaign on traditional and outdoor media in Milan and Rome, the celebrations for the new brand identity include a series of events in the Fontana Room and the Futurism Gallery in Milan’s Museo del Novecento, a setting that inspires innovation, dynamism and change, elements that make up the DNA of Dils.

The partners who took part in this great adventure were:

Us Up: Christmas Tree in Piazza Duomo, Milan