Real estate market 2021 in Italy: boom for Logistics and Living 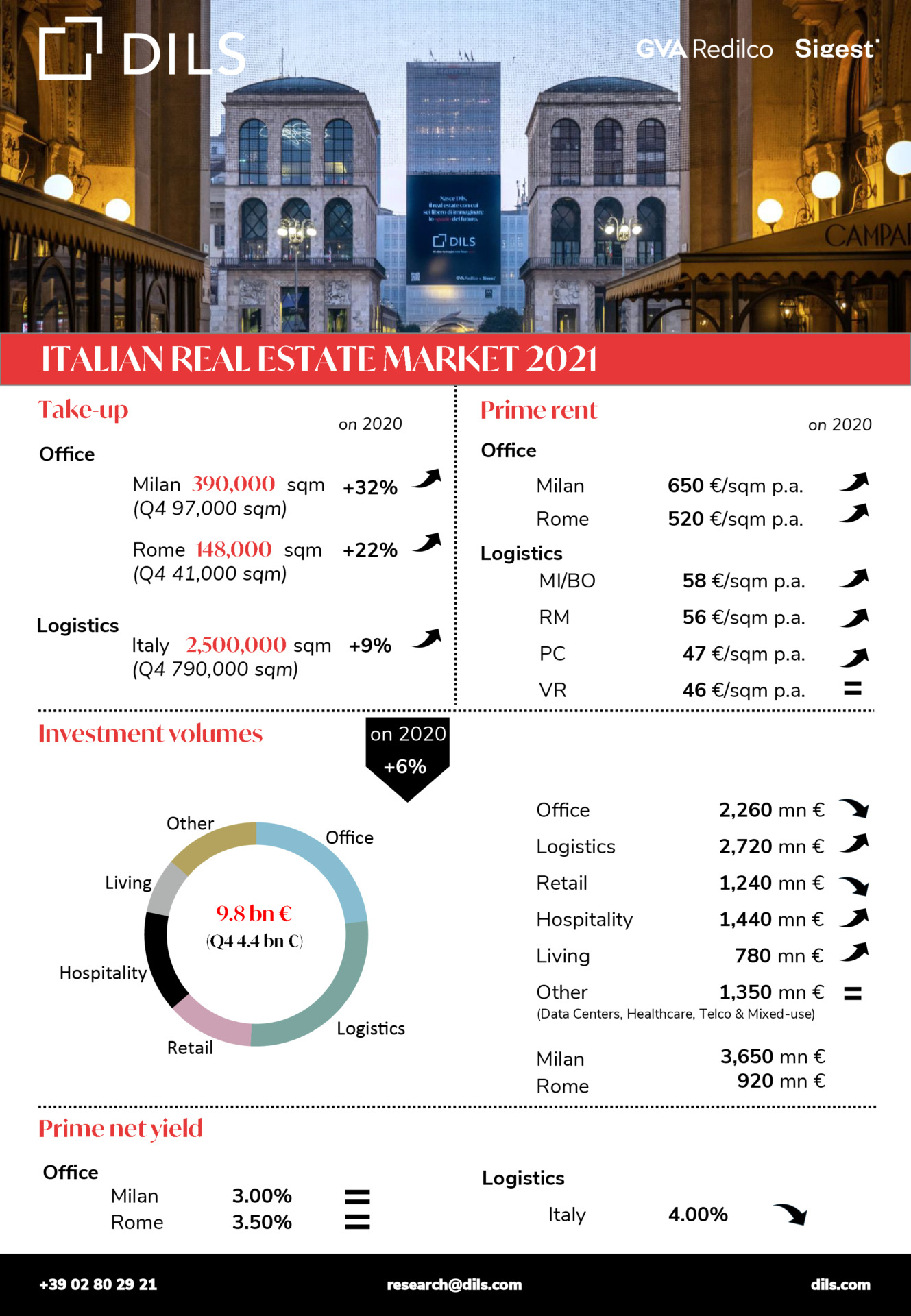 INVESTMENTS GROW TO A TOTAL VOLUME OF AROUND € 9.8 BILLION

BOOM FOR THE LOGISTICS AND LIVING SECTORS

HIGH-QUALITY AND HYBRID OFFICES TO TAKE OFF AGAIN IN 2022

The investment volume in Italy in 2021 reached approximately €9.8 billion, representing a 6% increase compared to 2020. The boost came in the last quarter of the year, when investments totalled € 4.4 billion, approximately 32% more than the same period in 2020.

Logistics is the market protagonist in 2021, accounting for 28% of the total investment volume (€ 2.7 billion) and recording 83% growth in transacted volumes compared to 2020. The logistics sector has been growing continuously since 2017, when it represented about 10% of the total volume invested annually. Activity from institutional investors with a focus on core product is growing, as they start to look at this sector with interest. Such interest is confirmed by the significant compression in prime net yields, down to 4% in the final quarter of the year and with a further decrease towards 3.5% expected in 2022.

The logistics sector recorded take-up totalling 2.5 million sqm at the end of 2021 (+9.3% compared to 2020), of which 32% related to the final quarter of the year (approx. 790,000 sqm). Speculative developments accounted for 14% of annual take-up, while 26% related to new warehouses for e-commerce activities and 4.6% to express couriers, whose activity is often linked to e-commerce. In Milan and Bologna prime rents reached €58 /sqm/year, while in Piacenza they stand at €47 /sqm/year. Of these, Bologna recorded the most significant growth in percentage terms.

Offices as an asset class came second in terms of preference by domestic and international investors, totalling € 2.3 billion of transactions in 2021 (with Milan at the top for almost € 1.8 billion), down compared to 2020 but recovering partially in the final quarter of the year, when the € 760 million invested helped reduce the gap with the previous year. Uncertainty caused by the persisting pandemic has undoubtedly contributed to orienting investors' choices towards core office products (with prime net yields expected to decrease), steering away from deals with higher risk profiles, which we believe will once again be protagonists in 2022 considering the take-up levels achieved.

The Hospitality sector is experiencing a strong recovery, with €760 million invested in the last quarter of 2021 (more than the sum of the previous three quarters) for a total investment volume of €1.4 billion (+58% compared to 2020). Value add deals were the most numerous, but the largest transactions in terms of volume invested involved luxury assets and portfolios of leisure assets and resorts.

The Retail sector, too, owes its recovery to an exceptional Q4, which recorded an investment volume of approximately € 978 million (almost four times the volume recorded in the first nine months of the year), bringing the gap with the previous year down to -9.6%. The finalization of a deal that involved a large portfolio with a significant High Street Retail component in Milan and Turin contributed to this volume.

In addition to Logistics, another sector that registered robust, constant growth is Living, which during 2021 recorded the highest registered investment volume of € 780 million, surpassing the top result for 2020 (about € 740 million). Multifamily and BtR appear to be the most effervescent markets and Milan the most dynamic, in terms of both volumes and innovation with projects characterized by their mixed-use and by a focus on sustainability and urban regeneration.

Nationally, the first nine months of 2021 showed a strong residential sales market (536,000 normalised no. of transactions), registering increases of 23% and 43% compared to 2019 and 2020 respectively. The excellent dynamism of the final quarter of 2021 suggests the year will close with extremely positive results. The Milanese market also reported a decidedly positive trend in the first nine months of the year (19,400 normalised no. of transactions), +1.7% compared with 2019 and +28% compared with 2020. The Dils Research Team has identified overall pipeline relating to over 27,500 new residential units in Milan and its hinterland, divided between 21,000 BtS units and approximately 6,500 BtR units.

Dils was involved in brokerage and advisory transactions for approximately € 3.2 billion, equal to one third of the total investment volume in 2021, with excellent performances in Logistics, Offices and Living confirming leadership in these sectors.

Giuseppe Amitrano, CEO of Dils has commented: “Despite the initial premises, 2021 proved to be a particularly positive year and the forecasts made by Dils already at the end of the first half were confirmed. For 2022, we believe that the Logistics and Living sectors will continue to be protagonists and we expect a strong recovery in investments in the Milan and Rome Office sector as well, not just for core capital but we will also see a return of value-add deals for the development of buildings and urban regeneration characterized by new hybrid and innovative concepts. This time, the initial conditions appear brighter than last year, and we expect a growing volume of investments and values, with a further slight contraction in yields."